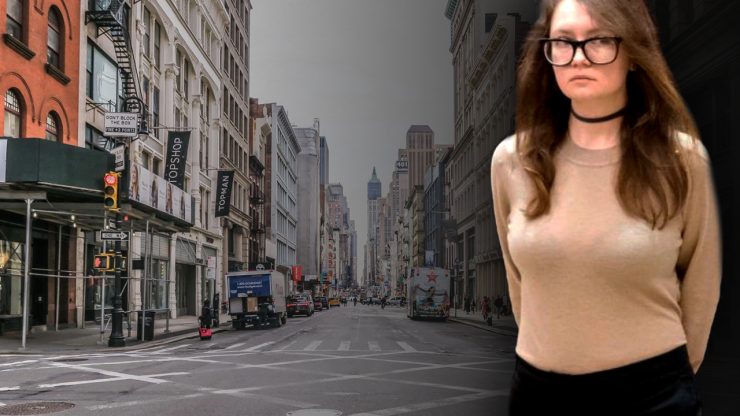 What Was She Found Guilty Of?

A jury in Manhattan on Thursday found Anna Sorokin, better known as the “SoHo Scammer” guilty of grand larceny.

Sorokin was convicted of second-degree grand larceny, theft of services and first-degree attempted grand larceny. During her stint as a fake heiress, she stole $275,000 from hotels, restaurants, banks, and people.

She could face up to 15 years in jail for the grand larceny charges. Her sentencing will be on May 9.

Who is Anna Sorokin?

Between 2016 and 2017, Sorokin waltzed around the most elite circles of New York, masquerading under the name of “Anna Delvey, ” a German heiress. In reality, she was born in Russia to a middle-class family. She later lived in Germany, London, and Paris before moving to New York.

Claiming to have $60 million in a trust fund, Sorokin would wear designer clothes, always matched with her signature Céline glasses. She would live for months at a time in the city’s swankiest, newest boutique hotels. Her life consisted of fine dining, luxury spa treatments, and exclusive parties.

She was also working towards owning a property on Park Avenue South to open a contemporary art club. She was found not guilty of first-degree attempted grand larceny for trying to obtain a $22 million bank loan to open said club.

The jury also found her not guilty of stealing from a friend who paid $60,000 for a trip to Morocco. Sorokin said she would cover the trip. When her cards bounced at the $7,000-per-night-resort, she had her friend, Rachel DeLoache Williams, foot the bill, promising to pay her back once her financial situations were sorted. She never did.

“I wish I had never met Anna,”  Williams said in court, according to Rolling Stone. “If I could have gone back in time to not be where I am today, I would. I wouldn’t wish this on anybody.”

According to the New York Times, Sorokin forged financial statements, made up an accountant, and lied about wire transfers. She would tell hotels and businesses that money was on the way from an account in Germany, but those funds never arrived.

“I am very upset that things went that way and I didn’t mean for it to happen,” Sorokin told The Cut, adding that she was not fond of the persona people perceived. “I was never trying to be a socialite. I had dinners, but they were work dinners. I wanted to be taken seriously”

The Spread of Sorokin’s Story

Sorokin was arrested in October 2017 for these charges. Her story gained public attention in the summer of 2018 when Vanity Fair and The Cut each published stories about Sorokin’s lavish life and the reality behind the curtain. There is also an Instagram account devoted to the outfits she wore at her court appearances, where she was dressed by a celebrity stylist.

A post shared by AnnaDelveyCourtLooks (@annadelveycourtlooks) on Apr 25, 2019 at 6:35am PDT

Both HBO and Netflix are working on their own series about Sorokin as well. Lena Dunham is pulling the strings on HBO’s project, which will be an adaptation of Vanity Fair’s piece. The Vanity Fair story was penned by Williams, who was one of the outlet’s photo editors at the time.

Shonda Rhimes will be working on the Netflix series and will be working off The Cut’s piece, which centers around a receptionist at 11 Howard, a hotel Sorokin lived in for a lengthy period of time.

See what others are saying: (The New York Times) (Rolling Stone) (GQ)

Trump Says the U.S. Did Not Pay North Korea $2 Million for Otto Warmbier