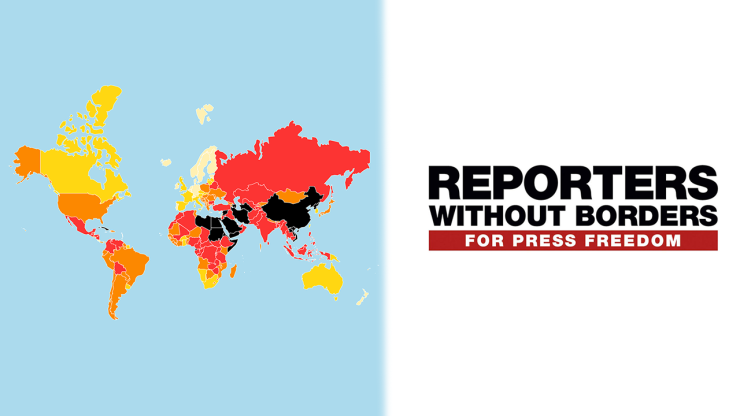 The United States has been ranked as a “problematic” place for journalists, as the threats they face continue to become more standard, according to a new report about press freedom.

The 2019 World Press Freedom Index, an annual report compiled by Reporters Sans Frontières (RSF) or Reporters Without Borders (RWB), downgraded the U.S. to No. 48 out of 180. The ranking is three spots lower than its place last year.

The downgrade officially changes the press freedom status of the U.S. from “satisfactory” to “problematic,” marking the first time the country has received that label.

#RSFIndex: For the first time, the #UnitedStates is coloured orange (“problematic”) on the World Press Freedom Map.
A man opened fire inside a newsroom, killing five people, but @realDonaldTrump continued to systematically denigrate the media.https://t.co/QYCSKKs2xB pic.twitter.com/uVObO1wwVH

“Never before have US journalists been subjected to so many death threats or turned so often to private security firms for protection,” the report said.

According to the U.S. Press Freedom Tracker, 10 journalists have faced physical attacks this year, and 46 journalists were physically attacked in 2017.

The World Press Freedom Index report also cited the five journalists who were shot and killed at the Capital Gazette in Annapolis, Maryland last June. The attack was carried out by a man who had threatened the publication for years before the attack.

The section of the report on North America specifically stated that the drop in rankings was “marred by the effects of President Donald Trump’s second year in office.”

“Amid one of the American journalism community’s darkest moments,” the report said.“President Trump continued to spout his notorious anti-press rhetoric, disparaging and attacking the media at a national level.”

Since being elected, Trump has referred to journalists as the “enemy of the American people,” and continuously accused nearly every mainstream media outlet of reporting “fake news.” He has also commended violence against journalists, like giving praise to a GOP congressman who assaulted a reporter in 2017.

According to the report, Trump has also called for the revocation of broadcasting licenses and attempted to block certain media outlets from access to the White House. In November, the Trump administration was forced to restore the press credentials of a CNN reporter that had been stripped of his pass after a heated exchange with Trump.

Back in August, United Nations human rights leaders stated that Trump’s attacks have undermined press freedom, and increase the risk of violence against journalists.

“The president’s relentless attacks against the press has created an environment where verbal, physical and online threats and assault against journalists are becoming normalized,” RSF Interim Executive Director Sabine Dolan told NPR.

The Index also found that the Americas has experienced “the greatest deterioration” in its press freedom regional score.

This is not just because of the United States. The report also cited instances in Brazil, where journalists have been targeted by supporters of President Jair Bolsonaro “both physically and online.” Experts often noted that Bolsonaro uses the same “fake news” refrain to discrediting negative media about him.

The report also stated that Mexico is one of the world’s deadliest countries for journalists, noting that “at least ten journalists were murdered in 2018.”

RSF identified North Korea and Turkmenistan as the most dangerous countries for the media, stating that their governments control the flow of information and censor journalists who defy them by using tactics including arrest, torture or killing.

In contrast, Norway ranked as the safest country, a title it has held for the past three years. Finland received second place.

“If the political debate slides surreptitiously or openly towards a civil war-style atmosphere, in which journalists are treated as scapegoats, then democracy is in great danger,” said RSF Secretary-General Christophe Deloire. “Halting this cycle of fear and intimidation is a matter of the utmost urgency for all people of good will who value the freedoms acquired in the course of history.”