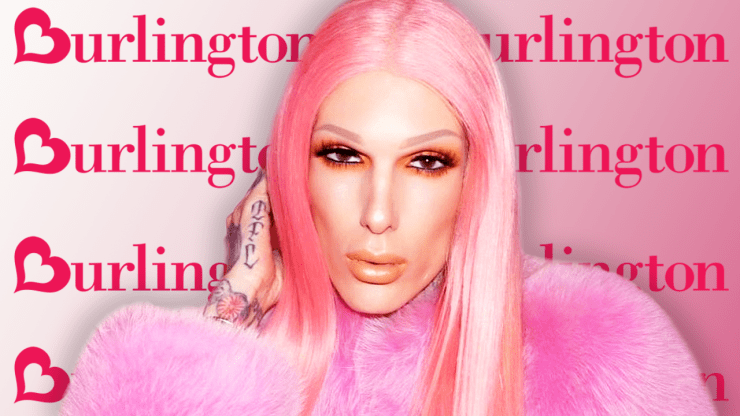 Discount retailer Burlington has come under fire for selling cosmetics that were stolen from internet personality and cosmetics brand owner Jeffree Star.

Earlier this month, Jeffree revealed that $2.5 million worth of product was stolen from his warehouse in California, including nearly an entire shade of an unreleased concealer. In a video discussing the robbery, Jeffree said he was working with law enforcement to track down the culprits, who he suspects are black market makeup sellers.

Since the robbery, listings for stolen goods have popped up on social media sites like Facebook. But, fans were pretty surprised to see some of Jeffree’s products at their local Burlington, formerly known as Burlington Coat Factory.

Jeffree has joked about discount retailers being a makeup “graveyard” for some brands, so when his products appeared on Burlington’s shelves, fans reached out with questions.

Jeffree once again I hate to be a bother but I saw this on a fan group that im in and not sure if you allowed your products to sell at Burlington. I dmed you on if and I guess I’m not allowed to send pics so here you go pic.twitter.com/W6IsaULLT1

Jeffree responded to one user and said that the liquid lipsticks were not only stolen but also expired. “We had those in a destroy pile before they were taken,” he wrote. “My lawyer is dealing with it and finding out how and why @burlington would ever allow this.”

Soon after, Jeffree took to Snapchat to further explain that when products at his company are expired, they are placed in a destruct and destroy pile to be incinerated at a later time.

“How did Burlington allow stolen items to be sold in any of their stores?” he said.

“This ain’t Marshalls and TJ Maxx. My brand isn’t like not doing well so we got to sell some to someone else. Bitch this is stolen items and they’re actually expired and not even good to use.”

Jeffree said his team would reach out to Burlington and investigate how this happened.“I really cannot believe someone tricked some executive at Burlington to take these off of their hands, write them a check, and then sell it,” he said.

He then warned fans to avoid purchasing these products and reminded them that the only physical stores you will find his cosmetics at in the U.S. are Morphe stores.

After Jeffree confirmed that the products were stolen, other social media users began telling him that they also found the products at their local stores.

Holy shit, I unknowingly bought one as well. ? pic.twitter.com/YQOY4iuMv8

I saw them at the Burlington in Downey as well, and I bought one ? pic.twitter.com/HhyHluG4ve

Some even said they found them at other retailers, like Marshalls.

I’ve seen some of your products at Marshall before too

Marshalls quickly responded to one user and asked them to share the location of the store where they saw the stolen products being sold.

Thanks for reaching out. Would you please DM us with the location of the store in Michigan you are referring to?

After being hit with much backlash from Jeffree and his fans, Burlington responded to Jeffree on social media saying it was “committed to selling only authentic, authorized, and legally sourced products in our store.”

“We appreciate this incident being brought to our attention and we are swiftly investigating the matter,” the company added.

“We have discontinued sales of these products and are immediately pulling remaining units from our stores. We are happy to partner with you and the authorities as you continue to look into this situation.”