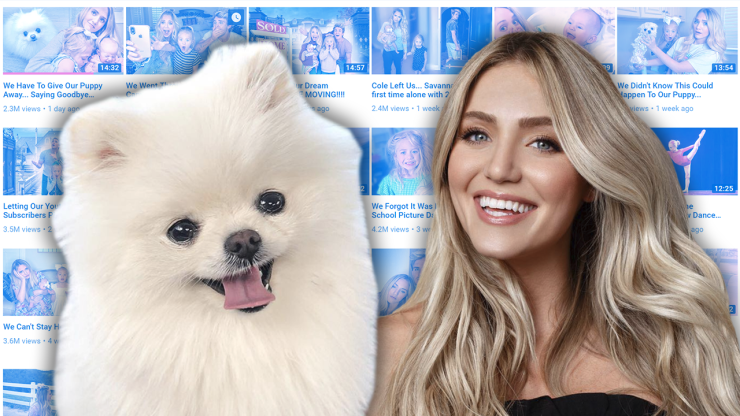 YouTubers Cole and Savannah LaBrant have been hit with a ton of backlash on social media over an April Fools’ Day prank they played on their 6-year-old daughter Everleigh.

The couple post family vlogs on their popular YouTube channel, The LaBrant Fam, which has more than 8 million subscribers. They also have massive followings on Instagram: Savannah has over 5 million followers, Everleigh has 4.3 million, Cole has 4 million, their newborn Posie has 1.1 million, and even their dog Carl has 759,000 followers.

On Monday, the family posted a video titled “We Have To Give Our Puppy Away … Saying Goodbye Forever :(”

In the video, the LaBrants tell Everleigh that their dog, Carl, has to move to a new home because they can no longer keep him.

“Basically we are giving Carl away to somebody else,” Savannah LaBrant says. “We feel like we can’t take good enough care of him at our house.”

Everleigh sits beside her mother with the tiny white puppy, fighting back tears while her mother explains the decision to the camera.

“I feel like we’re always gone. We’re always filming, or we’re out and about,” Savannah says.

“He poops and pees all over our house all the time…and we’ll have to leave for like 8 hours at a time once…and we feel bad we feel like he needs someone to take him outside more often,” she adds.

Everleigh remains quiet and looks down while her mom explains. At one point her father asks who she wants to give the dog away to and she just stares at Carl.

Savannah then starts giggling and whispers “April Fools” into her daughter’s ear as she cries.

“We’re keeping Carl!” she tells Everleigh, who then begins to sob.

“Too far?” Cole asks the camera, explaining that he wasn’t sure Everleigh would even believe their lie in the first place since the family had been pranking each other all day.

The rest of the video then focuses on “Everleigh’s Revenge,” as Everleigh pranks Cole in retaliation.

Many viewers took issue with the prank and left responses all over the family’s social media accounts. Viewers had to turn to other social platforms to react since YouTube has disabled the comments sections on family channels like the LaBrants in an effort to crack down on predatory comments.

That’s really mean and insensitive. They’re not pranking an adult or even adolescent, but a 6-yo. They are psychologically harming her and scarring her for life. And all for just views and clicks and likes and their own jollies. It shows a lack of empathy & realization of impact.

The couple has not responded to the backlash, however, at the end of the video Savannah LaBrant says, “If this offended any of you guys, she’s OK.”

“She cried for two minutes, and she’s the happiest kid ever now.”

See what others are saying (NBC News) (Tubefilter) (Mashable)

Over 70,000 People Have Signed a Petition To Remove PewDiePie From YouTube