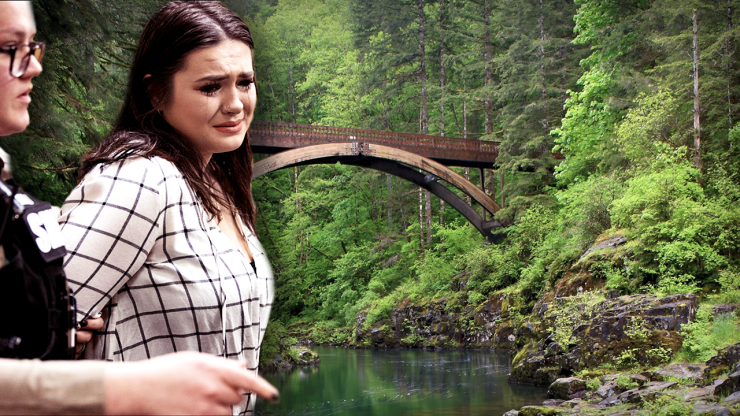 The Washington teen who pleaded guilty to pushing her friend off a bridge and into a river has been sentenced to two days in jail and 38 days on a county work crew.

Smith, 19, made headlines in August after a video went viral showing her pushing then 16-year-old Jordan Holgerson off the Moulton Falls Bridge. The footage shows Holgerson falling about 50-60 feet down into the East Fork Lewis River.

The fall left Holgerson with six broken ribs, punctured lungs, a hematoma behind her throat, severe bruising, and muscle tearing. Doctors said the fall could have been fatal.

Smith pleaded not guilty to a misdemeanor count of reckless endangerment last but changed her plea this month after accepting a deal offered by prosecutors.

Prosecutors recommended that she receive no jail time and instead serve 60 days of home confinement, 30 days of service with a work crew, and 30 days of community service.

In court Wednesday, Holgerson told Clark County District Court Judge Darvin J. Zimmerman that she is still dealing with physical therapy, pain, anxiety and panic attacks. “This nightmare started for me when I was falling through the air, and I was really terrified,” said in her prepared statement.

“When I was being pulled from the water, I thought, ‘I’m going to die,’ because I couldn’t breathe. And I was watching my body change color by the second.”

The victim’s mother, Genelle Holgerson, told the judge that she feels lucky that her daughter is alive today.  She went on to say that believed Smith pushed her daughter intentionally and should be forced to serve as many days in jail and her daughter spent in the hospital, a total of three days. “It has cost me and my family lost wages not to mention stress and heartache.”

“After Taylor pushed her, she did not rush down to see if Jordan was OK, she left the scene,” Genelle Holgerson said. “She did not show up at the hospital to check on Jordan. She did not stop by our home to see if she was OK or in any other way act like a friend.”

During sentencing, Judge Zimmerman noted the severity of Holgerson’s injuries and told Smith, “I think you need to do some jail time.”

Smith was ultimately sentenced to two days in jail and ordered to spend 38 days on a work crew. She must also pay a $300 fine and is prohibited from having contact with the victim for the next two years.

Smith will be placed on supervised probation until she meets the requirements of her sentence. “I’d like to sincerely apologize to Jordan Holgerson, her family and friends for the pain and humiliation I have caused by my mindless actions that occurred last summer,” Smith said tearfully in court.

“Jordan has passed through my thoughts repetitively since the incident. My words here are sincere. I can’t say I don’t deserve the hate from the media or the loss of old friends, but what I can say is that I have and will continue to try my best to my wrongs and pray for a full recovery, not only physically, but emotionally to the Holgersons and other people I’ve hurt by the decision I made. “

See what others are saying: (NBC News) (Fox News) (CNN)