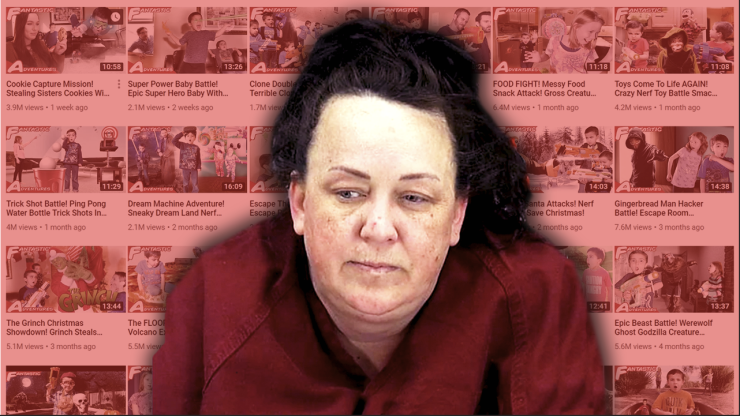 A mother in Arizona was arrested on charges of child abuse after allegedly abusing her seven adopted children when they did not perform as directed for videos on her YouTube channel.

Machelle Hackney was arrested on Friday in her residence in Maricopa, Arizona. She runs a YouTube channel called “Fantastic Adventures” which has garnered close to 800,000 subscribers and has over 240 million channel views.

According to the court records obtained by local news sources in Arizona, Hackney would physically abuse her children when they messed up lines or didn’t take her direction when making videos for the channel. These videos were generally sketches featuring the seven children, where they acted out fantasy-themed adventures.

She is being accused of locking her children in a closet, starving them, forcing them to take ice baths, pepper spraying their whole bodies, including their faces and genitalia, and beating them with belts, brushes, and hangers. On at least one occasion, one of her sons bled when the tip of his penis was pinched.

Hackney says she has punished her children in the past but denies these allegations. Instead, she claims she would have them stand in a corner, spank them, or ground them.

Her biological adult sons, Logan and Ryan Hackney, who appear on the channel, have also been arrested on charges of not reporting child abuse.

Hackney’s 19-year-old biological daughter contacted authorities last week after one of her adopted siblings told her what was going on. This prompted the police to conduct a wellness check, where they found the seven children to appearing pale and malnourished, one of whom was in a closet wearing only a pull-up diaper.

The children told officers they were hungry and thirsty. One child drank three 16 ounce water bottles in less than 20 minutes. However, another child was afraid to eat because they feared their mother would smell the food on their breath.

The police also obtained a search warrant and found bottles of pepper spray in Hackney’s room, which was located next to the closet the children were often locked in.

While being interviewed by police, some of the children told officers that they had been subject to numerous forms of abuse.

One of the kids told police, “I either get beat with a hanger or belt, or a brush, or get pepper sprayed from head to toe.”

The children who spoke also said their mother had pulled them out of school so they could focus on making YouTube videos. However, some of the kids could not even go through with the interviews, as they were shaking and afraid.

Only one of Hackney’s sons, Logan, spoke to officer’s confirming that he knew of some of the abuse going on. He said he and his brother Ryan had considered telling the police, but never acted on it. They would also try to sneak food to their siblings when they could.

The Department of Child Safety has taken the seven children out of Hackney’s custody.

YouTube has demonetized the videos on the “Fantastic Adventures” channel, but it still remains up.

“We work closely with leading child safety organizations and others in our industry to protect young people. When we’re made aware of serious allegations of this nature we take action, which may include suspending monetization, or, upon conclusion of an investigation, terminating channels.”

This is the same statement YouTube used following the arrest of Ian Rylett earlier this month. Rylett, the owner of the SevenAwesomeKids network, pled guilty to child abuse.

See What Others Are Saying: (The Washington Post) (FOX 10) (AZ Central)